I’m going to be duplicating Kickstarter updates from here on out. If you found this website, you’ve probably already read it. BUT A PROMISE IS A PROMISE.

This is going to be a long one. Here’s the brass takes for those of you with something better to do.

We also have a dedicated forum for the game: redmarketsrpg.com/LifeLines/

Please forgive the appearance.  The guy I paid for design and hosting made the website, took my money, promptly unplugged everything, and ran. I’ve had to get by with what I can figure out for myself, but at least the game has a digital home outside of KS now.

For a more in-depth update, continue on.

I meant to delay publishing this update for a few days…nearly a month ago. Sadly, the news I was hoping for is still delayed, but this is the phase of the process where we find ourselves. I’ve got to leave town for a wedding in a few days. I can’t stand to leave the enclave in suspense any longer, so I’ll drop what news I have.

This might lead to more frequent updates in the next few weeks. I know I hate having my email flooded with too much Kickstarter ephemera, but I don’t think our once-a-month rule is going to cut it in the short term. Before I get to why, I beg you to keep an eye out for Red Marketsin your inbox for the remainder of summer. I promise you each update will be important, even if one comes a few days after another.

First off, it’s bigger than I thought, even planning for my tendency towards over-writing. We planned originally for 400 pages, then I figured I’d be safe and budget for 450. When the final pages came in…it was actually over 500.

Cutting that much content from the pages would have two effects. Firstly, it would deny readers content promised in the Kickstarter. Secondly, redoing the left-right alignment of all the pages after multiple chapters had been pulled out would have added months to the production time. More time would have been added as we waited for entirely new print quotes. And none of these delays would account for the nearly two months it will take for the books to sail from Hong Kong to the distributor.

(BTW, I have a RPPR Game Designer’s Workshop episode due to drop in a few weeks where I discuss these pre-press issues with Ross Payton).

I don’t want to be late, so I didn’t cut anything. It’s just a big-ass book now.

Red Markets is 496 pages long. We were lucky enough to be overfunded in the Kickstarter thanks to the generosity of backers like you. It’s enough that I can cover the additional print costs. Rather than split the volume up into three different books (as is the fashion of late) or delay even further by cutting again, we’re just moving ahead.

It’s not a smart business move, retail speaking, but the core Red Markets book can get you playing in a couple hours and keep you playing for years. It’s got enough advanced rules variants and setting generators to fill two supplement books. I always wanted to make a big-ass game with staying power. If this isn’t it, no one can say I failed for lack of trying.

So the text is done. All art is placed and finished. I’ve laid down a deposit with our printer (Asian Pacific International), and I’m currently in my second round of proofs.

I’m not releasing PDF yet for multiple reasons. The first is that I can’t promise a PDF released today will be the same book that shows up in print. Print specifications for big companies are extremely unique, specific, and specialized. We’ve already had to make pretty drastic changes to things like art placement and margins; I can’t say it won’t happen again as the proofing process continues. I don’t want to release a PDF that ends up with a completely different Table of Contents and Index than the print version.

The second issue is a bit more complex. I’ve received hundreds of emails from people that missed the Kickstarter and would like to preorder. That’s absolutely great! Frankly, we need the money. Since the page number is beyond expectations, the print cost is overbudget, and that’s cutting into the stretch goal budget. It’s nothing that a hundred of the pre-ordered hardbacks can’t make up for; hell, less than half of that would get us back on track with the stretch goal budget. With all the people that have contacted me asking for a copy, I’m confident spending more on the print cost.

However, the moment I release the PDF to backers, it WILL be pirated. This is not a personal rebuke to our wonderful backers; it is a fact of living on the Internet. The beta was released for a grand total of three days before I found it on a google search. Piracy is an inevitability. It’s the price of doing business in the digital age: one that must be continually paid so long as the book is on sale.

If the pirated PDF harms the preorders people keep emailing me about, it’s going to harm the brand in its infancy and slow down the production of stretch goals. I don’t want that to happen, so the PDF release needs to be delayed a few more weeks. I freely admit this is a profit-motivated business move. In my defense, I offer that I don’t make many of those, and this one is made out of my dedication to providing the best service to the backers that made Red Markets possible.

The final reason I’m delaying the PDF release is that BackerKit isn’t ready. We know the dimensions of the book and weight, both with and without the dice. The dice are prepackaged and ready to throw into a box once the books arrive stateside. I’ve got distribution and Kickstarter fulfillment under contract.

BUT (there’s a lot of those, these days) the book is going to ship to over 50 countries for Kickstarter backers alone. That doesn’t even take into account international pre-orders that take place after the Kickstarter. It takes a long time to calculate the cheapest shipping prices internationally for each individual nation. Until I get the estimate of shipping costs, I can’t program BackerKit to charge backers. If I can’t charge shipping costs accurately, I can’t pay to get the book into people’s hands.

As such, the BackerKit is waiting on the quote. I’m going to launch it the very second the shipping tables can be built, but the timing on that is out of my hands. Kind of like the timing of receiving proofs, or shipping the book, or …

Publishing a big book always includes a lot of hurry up and wait. There are parts I’m personally able to influence (writing, contracting, etc), but the majority remains in the hands of other people. Project management can do a lot to mitigate this issue, which is why we assembled the books in rotating sections rather completing one stage at a time (by far the easier method). Hiring good people is another controlling factor, and I’m one of the luckiest people ever alive it comes to talented and reliable editors, writers, graphic designers, and artists.

But unless you’re big enough to run your own printing press and warehouse, there comes a time when the process almost entirely leaves your hands. This is that time. I’m confident I’ve picked good service providers, but they ship and print stuff everyday for thousands of clients. They’re going to get to Red Markets when they can, and we all have to accept that it’s done when it’s done.

I’ve made a website. It has a dedicated Red Markets forum called LifeLines!

Regarding the LifeLines forums: I don’t want our great communities on G+, Facebook, and Reddit to dry up, but the dedicated forums are a great way for us to curate all the great ideas the communities have had over the last year. It also has a dedicated in-character board where the inspiration shared by our oh-so-creative Takers can be turned into a living game document! I’ve never seen a forum where half of it exists to discuss the game and half of it exists IN the game. I’m super excited to see how it works out.

The website also has a resources page where we can collect all the character sheets, cheat sheets, and other peripheral handouts that make the game easier to play. I’m far more excited about our resources page than any promotional aspect of the site. I hope it’s as useful to all the players as it is to me.

I wish both sites looked more slick, but I have to admit I got scammed on the website. Rather than waste more money on uncertain results, I’ve decided to make do with what I can hack together myself. I hope you like it.

I may have another important update an hour from now…or in a month. I can’t really tell. Thank you for your patience and support for Red Markets. Please keep an eye on your inbox in the coming weeks. As always, you can read me on @HebanonGCal. You can hear me on RPPRand The Mixed Six. And if you have any questions, let me know in the comments. 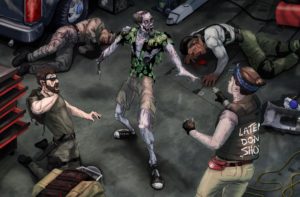 It’s not as pretty as I’d like, but that’s what you get when the web designer you paid takes the money and runs. It’s the best we can do for now. I suppose it’s fitting for Red Markets to make-do in such humble digs for now.

This is the new home of Red Markets. I’ll be duplicating my Kickstarter updates here. It’s also where you can find track out links to the Backerkit pre-orders and IPR store when the time comes

Perhaps most importantly, we now have a dedicated resources page where you can grab all sorts of useful stuff like game handouts, character creators, and inventory lists. And if that’s not enough, LifeLines is up! Get on there and join the Carrion Economy!