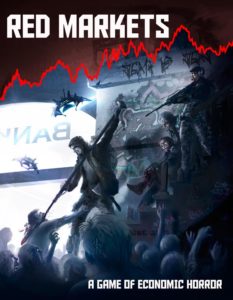 Hebanon Games is proud to be partnered with Indie Press Revolution for the sale and distribution of Red Markets. If you see an IPR booth at your local convention, get over there and support your hard-working indie designers. But if you can’t wait that long, get a book shipped to your house today using the link below.

The full-PDF of Red Markets is now available for sale at Drive-thru RPG. If you aren’t quite ready for the print book, it’s got everything you need to run the game and hyperlink navigation.

Best of all, unlike Indie Press Revolution (our print distributor), DTRPG has a review feature! Reviews of the game would be ENORMOUSLY HELPFUL, and DTRPG is a great place to drop them. Help us out! 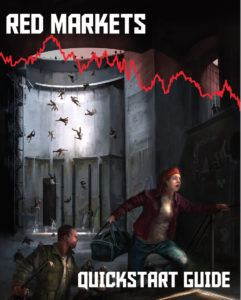 The Red Markets Quickstart Guide boils the game’s core mechanics down into less than 20 pages while the rest of the guide provides pregenerated characters, GM tips, player aides, and a starter scenario to get people playing immediately. Pass the PDF around the group to get everyone on the same page, or just try before you buy. Whatever your needs, games only truly live when they are played, and the Red Markets Quickstart Guide will get you playing faster than ever before. 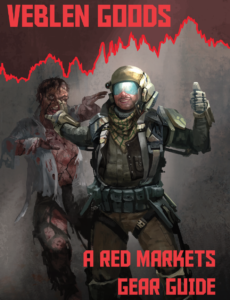 The cutthroat ideologies of capitalism, like Casualties, did not die with the apocalypse. Every Taker knows that their equipment is all that keeps them alive in the wilds of the Loss. The most successful Takers still seek to exhibit their prowess and affluence. Conspicuous consumption still impresses those that can afford it.The Veblen Goods Catalogue provides the discerning Taker with all the resources needed to showcase (and expend) their hard-won Bounty.

In this supplement for the Ennie-award nominated Red Markets, players can find new weapons, equipment, vehicles and upgrades that are ready for purchase for those who’ve made it big enough to afford them. 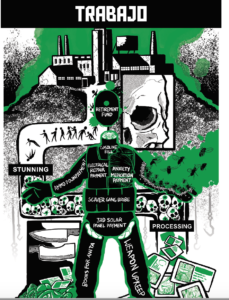 In countless slaughterhouses around the Midwest, the old world sent cattle and dreams to die in equal measure. Only the most marginalized and destitute slaved away on the killing floors, their health traded away as cheaply as the flesh they processed. As the Crash descended and the Blight taught people about true hunger, the tall fences, metal grating, and concrete walls of the abattoir were suddenly reappraised. Now, Trabajo is one of the strongest enclaves in the Loss: its fortunes reversed, its workers ressurgent, and its herds replaced by hordes. Unfortunately, Takers aren’t invited to partake in the bounty of the casualty lines. If they want to get rich, they’ll have to go out and kill for it: just like everyone else.

In this supplement for the Ennie-award nominated Red Markets, players take on the role of Takers in the Trabajo enclave: a fully-realized, pre-made setting ready for campaign play. The contracts the crew completes determine more than just their own survival. 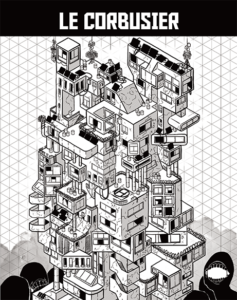 When the Crash came, Jeannette Architectural College used its brutalist architecture to fortify against the hordes of undead. But five years on, the concrete blocks and shipping containers of their fortress are far from self-sustaining, and rivalries between the enclave’s power brokers make for a political deadlock only outsiders can break. Luckily, there are plenty of desperate Takers with debts that will never die. In this supplement for the Ennie-award nominated Red Markets, players take on the role of Takers in the Le Corbusier enclave: a fully-realized, pre-made setting ready for campaign play. The contracts the crew takes on can shape the community’s fate or seal it. 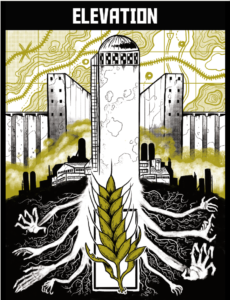 Elevation’s grain stores have served as both blessing and curse for years, fueling their survival as well as constant raider attacks, endless refugees, and ever-present risks of infection. Now, the rural stronghold faces a threat they never thought they’d see: starvation. The last hope is to sell the remaining grain to The Recession, the only market rich enough in starvation and capital to accommodate the shipment. The enclave needs a crew capable of securing a route for the most valuable shipment of goods The Loss has ever seen. In this supplement for the Ennie-award nominated Red Markets, players take on the role of Takers in the Elevation enclave: a fully-realized, pre-made setting ready for campaign play. For the first time, this publication presents contracts strung together into a single job line adding up to an epic tale of graft and danger. 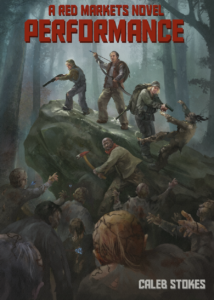 Interested in the world of Red Markets? Performance is a novel that takes place in the game’s setting, written by the designer himself. The book is available in a variety of formats: print, e-reader formats, and even an audiobook performed by the talented Fae Kells. 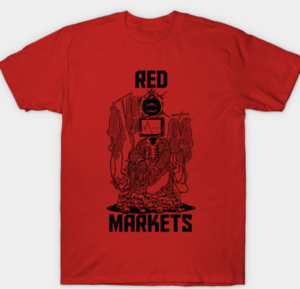 Get all your Red Markets march from Tee-Public: t-shirts, mugs, phone cases, and the works. More designs added regularly.